How COVID-19 Is Driving Virtual Reality Shopping In Australia

Just over one in ten (12%) consumers are using virtual reality (VR) technology to shop in Australia, according to a GetApp survey. But, because of the pandemic, 44% of respondents say they’re more willing to use it.

In this article, GetApp reveals how VR technology is being used in Australia—as well as the most prominent factors driving user adoption. But before we dive into the insights, let’s cover the basic definitions of virtual reality.

What is virtual reality?

“Virtual reality (VR) provides a computer-generated 3D environment (including both computer graphics and 360-degree video) that surrounds a user and responds to an individual’s actions in a natural way, usually through immersive head-mounted displays.”

In other words, using electronic VR-powered technology (such as an app combined with a headset and gloves fitted with sensors) users can experience a computer-generated simulation within an artificial three-dimensional environment.

A common misconception around these types of experiences is that users need a high-end VR headset to take part, but this isn’t true. Some smartphones have VR-capabilities, meaning consumers don’t need to depend on powerful computer hardware to participate. To enjoy the VR experience, users would need to slip their smartphone into a VR headset, and run the app or game they desire. The smartphone acts as both the display and the processing unit.

Check out how Warner Bros created a subversive VR experience for The Meg fans:

Another area of confusion is the differences between VR and AR (augmented reality.) The two concepts are similar, but the primary differentiation is their levels of immersion.

AR software adds digital elements to the view of the user’s real environment. For example, a filter on Instagram or immersive games like Pokemon Go on mobile phones. VR, on the other hand, replaces the user’s real-world environment through body and motion-tracking capabilities.

What is virtual reality shopping?

Virtual reality shopping lets customers digitally step into a 3D store, allowing them to move through it and observe the products for sale. In effect, the experience is an extension of the traditional online shopping experience.

To see it work in action, check out EyeSee’s 3D virtual store:

GetApp surveyed 1,012 Australian consumers (scroll to the bottom to see a full methodology) to get their opinions on VR technology. Read on to discover the key insights about virtual reality shopping usage in Australia.

1. Millennials are the fastest adopters of VR shopping 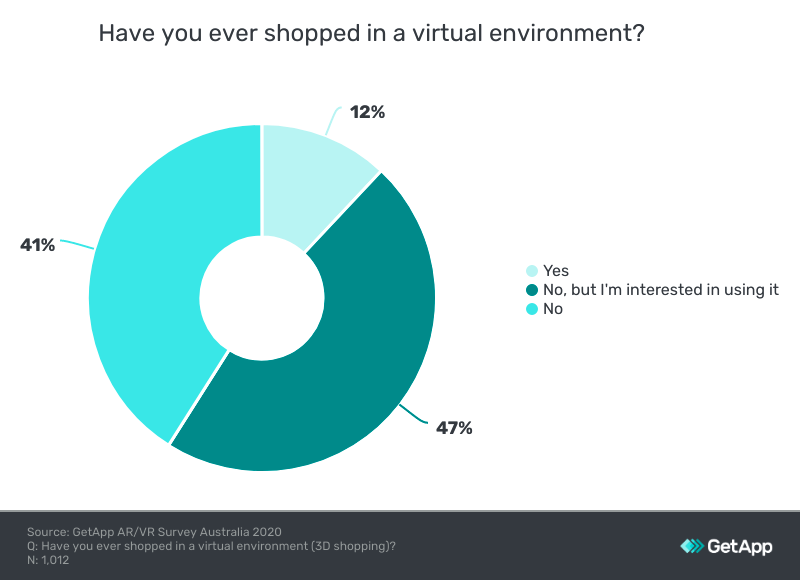 The current users of VR include:

The group is also technology-curious. As well as VR, 76% of this group have also tried AR to shop.

The Australian consumers closest to adoption next

The majority of those interested in trying VR (47%), the majority fitted into a similar demographic to those already using it. Respondents are:

However, there was one standout difference between them. The second group were slower to explore emerging technologies. While 76% of the first group had tried AR, only 14% of the second group had.

Along with a VR app, headsets are the most common way for shoppers to buy: 45% of respondents said they’d shopped this way while 41% used a pair of dedicated VR glasses. 15% used a web browser to navigate the 3D shopping environment.

The five most popular VR headsets for Australian shoppers surveyed include:

How much a consumer is willing to spend on these tools depends on whether they’re already using VR or if they’re simply interested in it.

46% of respondents already using VR to shop are willing to spend upwards of AUD$300 per headset. Whereas a fifth (20%) of respondents who said they haven’t used it, but want to, will only explore the technology if the headset is provided for free by the store. 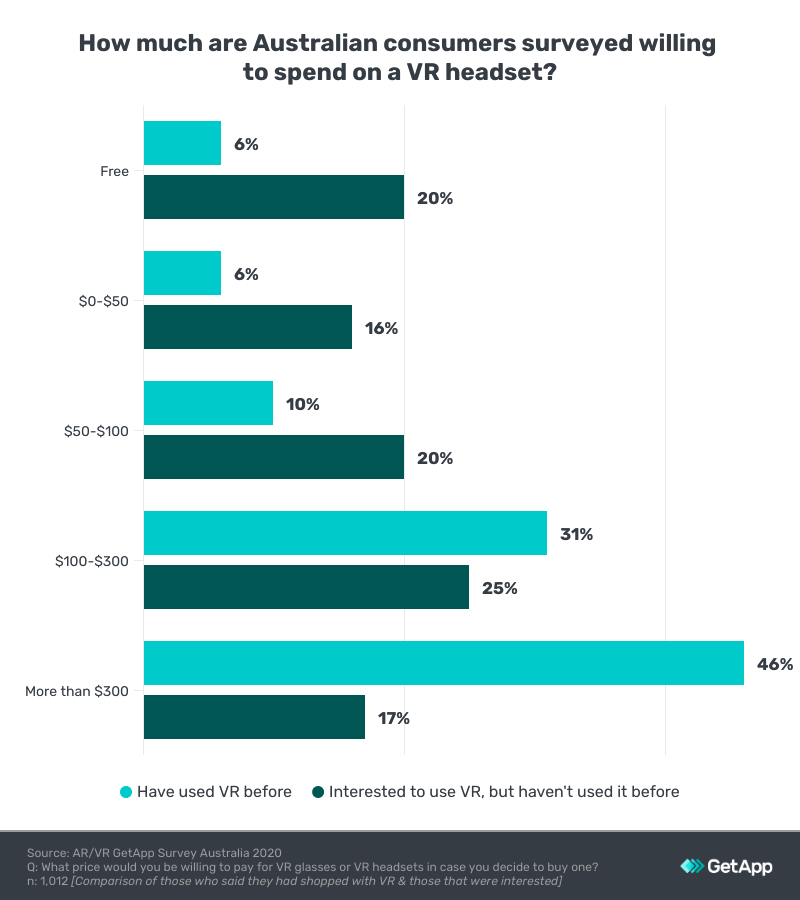 3. Food, drinks and clothes are bought the most using VR

The most popular items to buy using virtual reality shopping technology is food and beverages (67%.) Following closely in second place was clothes and accessories (63%.) 4. The pandemic is driving interest in VR shopping

59% of Australian consumers surveyed want to use virtual reality to shop because they believe it will help reduce the risk of infection during the pandemic.

The same amount of respondents (59%) said they use or want to use VR to have an experience similar to that of a store, but without leaving their home. This indicates that while the pandemic may be a key driver at present, there are other influencing factors at play. Retailers shouldn’t assume that the consumer demand for this type of technology has an expiry date for when life returns ‘back to normal.’

One third (33%) of survey respondents said they’ve watched content or adverts in 360º video format (which also falls under virtual reality.) A further 30% are interested in doing so. For those that are new to 360º videos, here’s an example from Kit Kat in their #MyTravelBreak campaign:

Two prominent reasons are driving the desire for 360º video content: Entertainment value and enhanced product explanation. However, improving the purchase decision process and perceptions of brands were also given as top reasons why 3D videos are useful.

The pandemic is changing consumer desires and behaviours in many ways—how consumers shop is simply one of them. But no matter whether it’s for our personal lives or our job, one aspect is changing: The increasing need to perform everyday tasks from home.

To maintain and grow market share, retailers must monitor their customer’s needs closely, and respond accordingly. It’s unlikely that immersive technologies will take over traditional online or in-store shopping experiences. However, with almost half (47%) of Australian consumers surveyed stating that they’re comfortable with using AR and VR shopping in the future, it’s not going away.

GetApp wanted to understand how shopping habits in Australia are changing in light of COVID-19. We surveyed consumers living in Australia, and over the age of 18-years-old, to discover the role of virtual reality in this.

The full panel of 1,012 respondents includes 51% female and 49% male respondents. Incomes ranged from less than $15,000 per annum to more than $201,000 per annum. The participants also came from various business sectors and levels of seniority.

Note: There were several answer options available for the graphics so that the total of the percentages exceeds 100%.

This article may refer to products, programs or services that are not available in your country, or that may be restricted under the laws or regulations of your country. We suggest that you consult the software provider directly for information regarding product availability and compliance with local laws.