Augmented reality shopping technology isn’t a new concept in the retail industry, but it’s not common either. Just 17% of Australian consumers have used it to shop online according to GetApp’s survey—even less (11%) have used the technology in stores.

Yet, because of COVID-19, interest in augmented shopping is on the rise: On average, 51% of Australians think augmented reality (AR) would make their online and in-store buying experiences safer.

In this article, GetApp highlights how augmented reality could advance shopping online, and be a potential solution to revitalising the struggling high street.

What is augmented reality?

Augmented reality is a concept that many of us may have come across, despite not fully understanding what it is. Games, such as Pokemon GO and Jurassic World Live operate using AR technology—as do the filters we use on social networks like Instagram and Snapchat.

‘The real-time use of information in the form of text, graphics, audio and other virtual enhancements integrated with real-world objects. It is this “real world” element that differentiates AR from virtual reality. AR integrates and adds value to the user’s interaction with the real world, versus a simulation.’

The technology works by superimposing additional content (such as moving images) onto the user’s actual surroundings.  The virtual image overlays onto real-world products or environments based on the input received from a device. This could be through the camera of a phone or other wearable devices, like AR-enabled glasses.

Augmented reality shopping, also referred to as augmented shopping, is the process of using AR to shop.

Examples of AR being used in a retail store

Timberland is one retailer that was quick to jump on this trend with its Augmented Reality Campaign. The shoes and clothing brand created a ‘magic’ mirror outside one of its stores in Warsaw, Poland, enticing passersby to try out their virtual fitting room.

The thought process behind the AR experience was more than just gimmick. According to Marketing Squad:

‘Timberland has been on a journey since 2011 to change their marketing strategies, as well as their target market – millennials. [The brand] created value for their customers by developing a fitting room that is efficient and easy to use. The ease of trying on their clothes enticed customers and encouraged them to participate in the AR campaign.’

Examples of AR being used online

Ikea was one of the first retail companies to bring an augmented shopping experience into peoples homes.

The idea behind the app was to help the customer visualise products from their website in home-settings. The AR app allows users to hold their smartphone camera at an area of their house to see how the piece of furniture would look there—and this kind of service may be more necessary than you think.

How is AR being used in the Australian retail market?

GetApp surveyed 1,012 Australian consumers (see full methodology at the end of this article) to explore how they’re using augmented reality for retail shopping. While many themes are driving this trend, we honed in on the most important ones for retailers.

Early adopters are already using it to shop in Australia

On average (across online and in-store purchases), 14% of respondents said they’d used augmented reality to shop.

Considering that Millennials and Generation Z are often referred to as digital natives, it’s unsurprising that they are the biggest users of augmented reality technology. Retailers that want to introduce this tech to their services should pay special attention to this group. Why? Because these are the people that drive ideas out and spread them to other people.

The Diffusion of Innovation Theory explains why it is important to hone in on the personality traits and characteristics of consumers that accept innovations fastest:

‘Adoption of a new idea is caused by human interaction through interpersonal networks.  If the initial adopter of an innovation discusses it with two members of a given social system, and these two become adopters who pass the innovation along to two peers, and so on, the resulting distribution follows a binomial expansion.’ 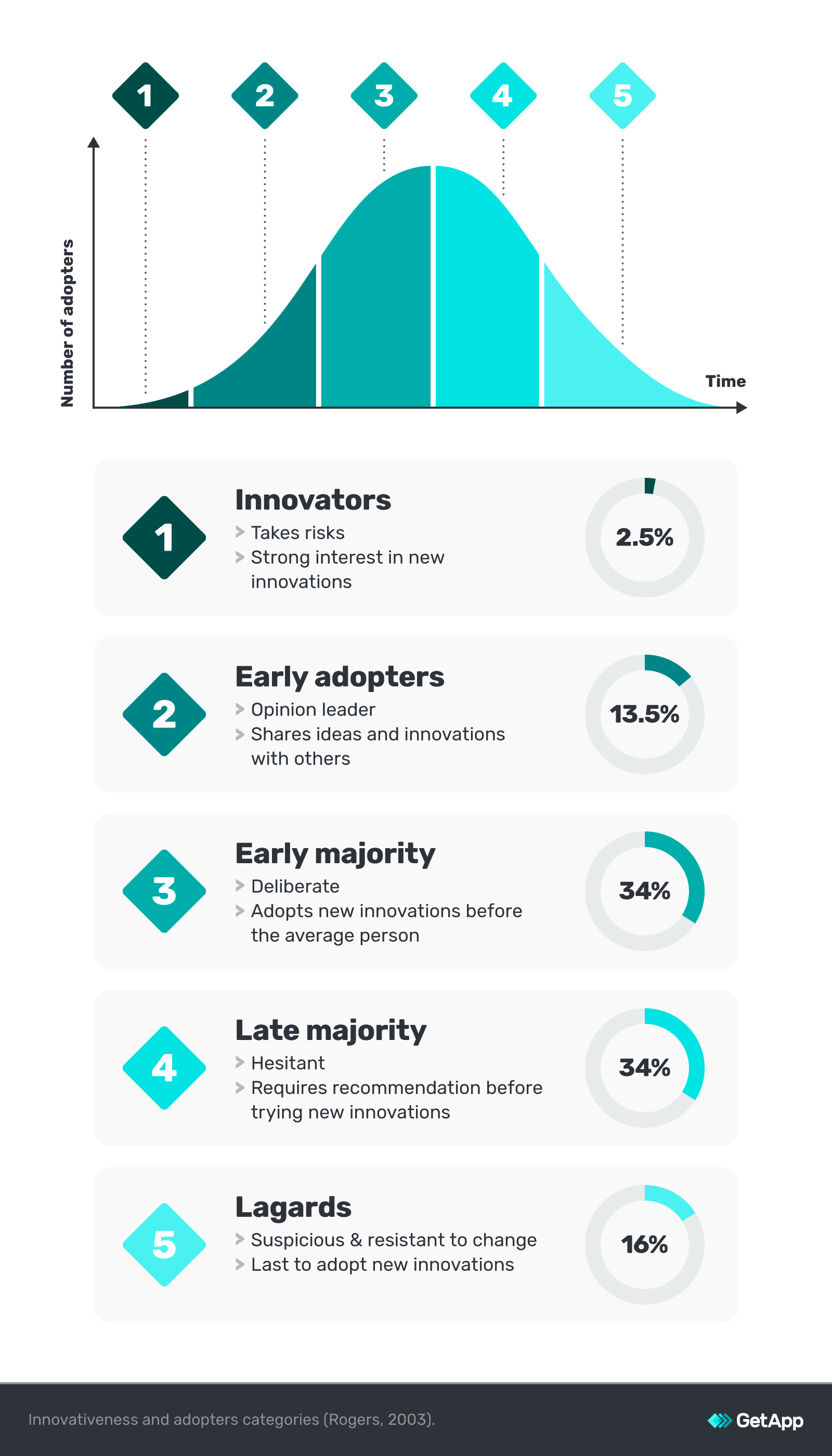 Those targeting age groups under 35-years-old should think ahead about how AR will be used in a few years time. Preparing applications now will allow them to catch the market as market share grows. To organically drive brand awareness by developing an AR application, hone in those that fit the role of innovators and early adopters.

Around half of Aussies are interested in using it

An average of 49% of Australian consumers said they’re interested in using AR technology to shop online or in-store.

34% have not tried augmented shopping online, and have no interest in doing so. Slightly more respondents (39%) felt this way about using AR for in-store shopping. Primarily, this was because they:

Key takeaway: Integrate AR into your audience’s most popular channels

There is interest in augmented reality shopping in Australia. Now is the time for brands to consider the best ways to introduce it to their audiences. To increase how quickly they embrace it, consider the platforms where consumers are already using AR. For example, there may be an opportunity to incorporate it into social media strategies.

The most popular items purchased through augmented shopping differ slightly, depending on whether the consumer is online or in-store. However, clothing remained the top choice for both.

Clothing was also the top choice for those that hadn’t shopped using augmented reality but were keen to try it.

Key takeaway: There is potential to tap into AR across multiple categories

Before investing in augmented reality experiences, eCommerce brands and stores that specialise in these categories should consider why they’re doing it. Are they jumping on a trend or seeking to bring genuine value to their users? The latter is likely to be much more successful in achieving business goals.

The main use of augmented reality is to help consumers ‘see’ the product in its potential context. For example, Dulux’s Colour AR app lets customers visualise how shades of paint would look on their walls.

GetApp’s results demonstrate that AR is serving its purpose well. Around two thirds (65%) of respondents said the technology made their ability to visualise the product in the right place easier when shopping online. Around the same (61%) said the same for shopping for products in-person.

2. Protection against the pandemic

For both in-store and in webshops, the top three reasons for wanting to try augmented shopping were the same. Protecting themselves against COVID-19 was the second-largest aspect driving consumers towards AR technology.

Top 3 reasons for wanting to use AR to shop:

Less than half (46%) of all respondents have changed their perception towards augmented reality and are more willing to use the technology.

On average, 49% of consumers who have shopped using augmented reality (either online or in-person) said it made purchases faster. One reason for this may be that with AR, less travel time is typically required. However, it may also be because users have access to more details, which enables them to make decisions quicker.

37% of users said AR provides them with more information on the product when shopping in-store. For online shopping, this response increased to 38%.

Return rates of augmented shopping products is a challenge In terms of accurately representing real-life products, AR may still be finding its feet. According to Appinventiv, however, retail augmented reality app development levels are ‘improving at breakneck speed.’ Despite being around for some years now, it’s important to note that the technology is still young in essence.

However, AR will help retailers adapt to the post-COVID-19 reality

There is genuine market interest in augmented shopping, and evidence that it can improve the retail experience. With that in mind, now is a good time for retailers to get ahead of the curve and explore its full potential. AR is no longer a future possibility for retail—it’s here.

Looking for augmented reality software? Check out our catalogue.

GetApp wanted to understand how shopping habits in Australia are changing in light of COVID-19. We surveyed consumers living in Australia, and over the age of 18-years-old, to discover the role of augmented reality in this.

The full panel of 1,012 respondents includes 51% female and 49% male respondents. Incomes ranged from less than $15,000 per annum to more than $201,000 per annum. The participants also came from various business sectors and levels of seniority.

Note: There were several answer options available for the graphics so that the total of the percentages exceeds 100%.

This article may refer to products, programs or services that are not available in your country, or that may be restricted under the laws or regulations of your country. We suggest that you consult the software provider directly for information regarding product availability and compliance with local laws.